If You Plan To Have A Few Drinks With Friends, Be Sure To Eat As Well 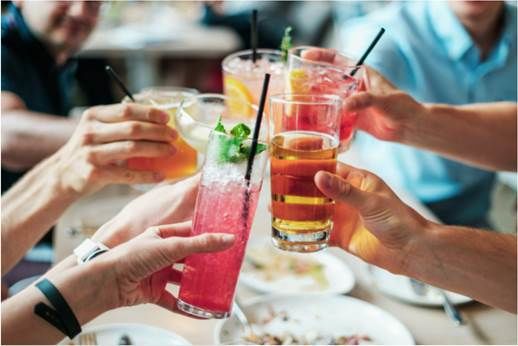 Drinking with friends can be fun, but let’s be honest. Too much alcohol, and that too on an empty stomach, can lead to some serious consequences. So if you plan to have a few drinks with your friends, make sure that you eat as well. This blog post will explain the role of food while you’re having some drinks with your mates.

What Happens When You Drink On An Empty Stomach?

Everyone absorbs alcohol at a different pace, and there are many factors that affect this. One of the factors that impact alcohol absorption is food consumption. In simple terms, alcohol is absorbed by the small intestine. So if it remains in the body for a long time, the absorption process will slow down, and its effects will also be preventable.

When you drink on an empty stomach, the alcohol is quickly absorbed by the small intestine and goes into the bloodstream. This ultimately results in the side effects of drinking, such as impaired thinking, inability to coordinate movement, and much more.

Food basically prevents the alcohol from going through the intestine and into the bloodstream. So if you have food in your stomach, the alcohol absorption will be slower. This can greatly prevent the consequences of the side effects in extreme cases – provided you drink responsibly.

Instead of munching on junk food with lots of calories, switch to something that will help you through the next day’s hangover and will also serve as a healthier alternative. The calories in alcohol can quickly add up, and it also impacts your body’s ability to burn fat. On top of that, consuming unhealthy food will lead to obesity. So if you are watching your weight, you better keep this in mind. Here are some healthy food options for you to try while drinking:

This might not be your first choice, but chicken noodle soup is a great option since it replenishes the amount of sodium in the body. It also contains the essential amino acids that help your body to get rid of the toxins that cause headaches after drinking.

Bananas are rich in potassium (an electrolyte that is drained out of you when you drink). Bananas will quickly bring up your level of potassium back to normal, which will also help get rid of the hangover faster.

Eggs are rich in the necessary amino acids needed to get rid of the toxins in the body. The amino acids produce glutathione (an antioxidant), which breaks down the other toxins. This improves the hangover symptoms, and your body feels much better after drinking.

Pickles contain high amounts of sodium, which is lost while drinking. Eating pickles will quickly boost your levels of sodium and prevent a bad hangover.

When you drink, your body flushes out magnesium, which is an important nutrient. Nuts contain high amounts of magnesium, and they can help restore what you lose as a result of alcohol consumption. They also help to reduce the effects of a hangover.

Spinach contains folate, which is depleted due to excessive drinking. Studies suggest that alcohol hampers folate absorption, and too much drinking can lead to a deficiency. So it is better to keep your levels up.